A great day with mixed precipitation. My late mother would have said, “It feels like snow,” but it’s rain that’s falling from the sky, with the temperature hovering precariously near the 32-degree mark. I dread the thought that the roads may turn into a giant skating rink tonight.

I need to pre-record my radios show tonight. My son, grandson, and granddaughter are heading to Red Sox Winter Weekend on Saturday, and, although I could rush back to do my show live, I don’t want to. This event allows fans to interact with Major League Baseball players on their favorite teams, get autographs and take photos.

I have attended this event several times in the past. It’s always been fun for me to hang out with fellow Red Sox fans and get excited about the upcoming season. This team, however, has a gray cloud over its head. The team allowed our best player, shortstop Xander Bogaerts, to leave as a free agent to go play for the San Diego Padres. Several years ago, they did the same thing with Mookie Betts, who left as a free agent to the Los Angeles Dodgers.

Bogaerts and Betts were what are known as “franchise players”–that is, players who came up through the Red Sox system and were the face of the team, helping them win World Series championships and even inspiring a city during tragedy. We fans never will understand why they let Betts and Bogaerts walk. It’s not as if the Red Sox didn’t have enough money to pay them. (The whole free agency system boggles my mind as a baseball fan, but that’s a topic for another day.)

Management did work to keep another franchise player, Rafael Devers, a talented third baseman, who now has no shortstop to throw the ball to, since Bogaerts is gone. The Red Sox thought they’d just shift second baseman Trevor Story over to that position, but, oh, wait: Trevor Story needed elbow surgery last week. Now? No shortstop in sight.

Perhaps what my son, grandson, and granddaughter will be doing this weekend will be hunting under rocks for a shortstop, then. Maybe we should wear our jungle hats and seek look for players, asking, “New shortstop, I presume?”

In the past, Winter Weekends have been joyous. I’ve met several Hall of Famers at these events, including one whom I directly told, “I have always loved you (Jim Rice), and one who was really nice (we spoke Spanish for a couple of minutes) and he’s also be gone this year (JD Martinez). Outstanding pitcher Pedro Martinez (see photo, below) and I joked around while our picture was taken. I was hoodwinked into sitting in a TV “chair” and fake “calling” David Ortiz’s 500th home run. It was blast. I don’t know what to expect this weekend. So many of my fellow Red Sox fans aren’t excited about the upcoming season.

I can’t wait to see my family, though. We will have a great time, and maybe I’ll get another hug from Jim Rice. But it won’t be the same without “my” Xander and “my” JD. If you’re in California and see either of them, you can tell them for me that I still love them. 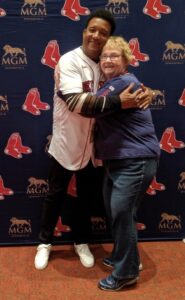